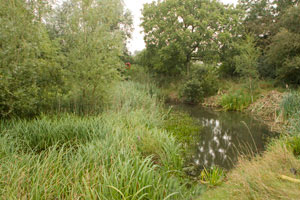 In late April 2011 I noticed some chewed iris leaves beside the pond which takes all of the drainage water from the farmyard. This looked like water vole activity but the presence of voles seemed unlikely as we are at least one and a half miles from the nearest stream and a good two miles from any river but I looked for the telltale droppings just in case. As expected there were no droppings so I presumed that a rat or rabbit had made a meal of my flag                       The farm pond

iris plants and thought no more about

water voles. Some 3 weeks later I saw a small rodent swimming into a clump of sedge at the side of the pond, I knew this was not a rat (I have lived on farms all of my life so I know what a rat looks like!!) it had to be a water vole. With great excitement I rushed in and grabbed my camera to try and get proof of what I knew in my own mind I had seen. Within half an hour I had the evidence, a photo of a water vole swimming across the pond just 50 metres from my bungalow. Then I was straight back into the house to raid the fruit bowl (like me water voles love apples).

For the next few days I kept the vole well fed and even went to the shop for fresh supplies (I don't normally do shopping!). Suddenly the apples started to disappear at an alarming rate, had the vole told all its friends about my trip to the shop? My video camera was setup by the pond in an attempt to discover what was eating all those apples, the resident moorhens had got in on the act so now I had to find an alternative source of food.  A carrot was placed on the bank in front of the video camera and the vole was soon seen knawing away at this latest delicacy and to my delight the moorhens paid no attention to it so from now on this was to be the food for water voles.

For another six weeks I kept feeding and watching the vole hoping against hope that there might be more than one but I suspected all along that this was just a solitary vole which had stumbled on my remote pond. It would often take the carrot into the rushes so it was just possible that it was feeding a mate but more likely that it was going into cover to eat its food out of sight of any predators that might be watching. Then one Sunday afternoon I saw three babies so finally I knew I had a breeding pair. The very next day I saw both adults for the first time, presumably the mother had spent most of her time in the nest with the babies which explains why I was only seeing one vole.
Baby water vole
eating carrot

As I write this in late August we still have at least three, maybe four voles feeding on the carrot I put out for them each day. It gives me great pleasure to have these wonderful creatures living so close and I have thoroughly enjoyed the chance to study and photograph them at close quarters. I hope they become a permanent and sustainable colony so watch this space to see how they progress over the coming months and hopefully years.

To view a selection of my water vole photos please click here I am sure you will enjoy them.