My favourite sound of spring has to be a song thrush singing from its perch high in the alder tree near my bungalow as I wake on a fine sunny morning.  I have identified at least three territories on the farm this year so hopefully I will be hearing that delightful sound every morning for the next few months.  I have a mixture of native hedges, grazing paddocks and rough grassy areas which help to ensure there are plenty of worms and snails to feed these beautiful birds as well as suitable sites for them to nest. 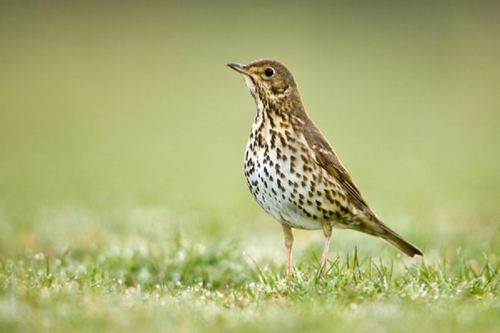 Barn owls breed in one of my boxes

If you saw the news about the barn owls setting up home in my owl box and have been waiting for an update here it is!  The reason I haven’t posted earlier is that a Norfolk mill was broken into this spring and the owl chicks inside were stolen.  As a result I decided to wait until the breeding season had finished before giving my owls any more publicity.

I reported the nest site to the BTO and in early June two of their local ringers came to inspect the box and found five healthy owlets (photos here).  The owlets were all ringed and returned to the box and have continued to do well.  Although the parents have not been hunting near the box I have been able to watch them returning with prey at regular intervals.  This has been a good year for field vole numbers and as a result prey was being taken back to the nest at a rate of around three voles per hour, mostly by the male.

All five owlets survived to the point of leaving the box and have been flying around the nest site at night and returning to the box to sleep during the day.  As I write this in mid August it seems that they have now left to find territories of their own.  Lets hope some of them survive the winter and can themselves breed next year.

I will be keeping my vole feeders well stocked to make sure there is plenty of food for the owls this winter and hope that the parents nest in the box again next year.

I have just spent the day in Holkham Park to photograph the deer during the rut. Holkham Park have two deer species, a small herd of around 40 red deer and a large herd (several hundred strong) of fallow deer.  As the number one red stag does not have any serious competition there is not much action among the reds during the rut so I concentrated on the fallow deer.

For more photos and information about the deer rut please click here.

Since the end of the breeding season barn owl sightings have been few and far between here on the farm.  This is normal for the time of year, the nights are long and the high vole numbers of 2014 along with the continued mild weather mean the owls are able to find plenty of food during the hours of darkness.  As the nights start to shorten and vole numbers decline over the next few weeks we may start to see the owls hunting at dawn and dusk,  Off course the fact that I am not seeing them much at the moment is a good sign, a barn owl hunting during daylight at this time of year is a hungry owl and it’s good to know our owls are well fed at the moment.

The box which our barn owls nested in last year is being used as a roost site by at least one owl at the moment, I think it is the male that was so busy bringing food back to the five owlets which successfully fledged here in 2014.  I have been using my trail camera recently to monitor activity around the box and have regularly captured images of an owl leaving the box just as it gets dark and returning at first light.

I am hopeful that I will have barn owls breeding here again this year and will post updates if and when I see evidence of nesting.